This is an intimate anchorage with good shelter from west thru north winds.

Though the anchorage is in the shadow of the headland in late afternoon, it offers great views south and east in morning hours.

From the west and south, look for Bowen Pt. then spot the huge slanted rock on the headland.

If approaching from the east, look for Bowen Pt, which is a mile or so beyond Alberts. Bowen Pt. is the most prominent headland and has a large white rock at its base. With that in sight, look in the foreground for the saddle back ridge atop the headland.

Arriving from the east, Albert Anchorage opens up to starboard. Approach the beach slowly to avoid kelp and submerged rocks. 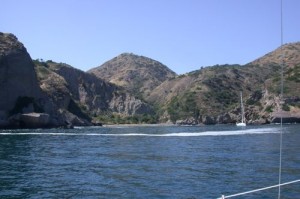 One Hook or Two?

In summer, it’ll be two because you’ll probably be sharing the anchorage.

We veered out almost 300 ft. of rode, then set the stern anchor, keeping a little strain and dropped our bow anchor. We pulled ourselves back – with a little help from the wind – as we veered out 150 ft. of rode at the bow.

If there had been more than the gentlest breeze, we’d have dropped the bow hook first. There’s a pile of rocks and a small drying area that we use as a guide for dropping our bow hook under these circumstances. Check out the video for details.

We settled down with a bit more than a 6:1 ratio at the bow and stern. We set the anchor alarm for .01 nm, about 60 ft. That doesn’t give much comfort or relieve one of frequent anchor checks since we were within about 75 ft. of the rocks.

In January of ’18 we left Channel Islands Harbor in a gale warning to practice heavy weather tactics. We spent night one in Yellowbanks, but looking for variety, we headed for the south side of the island for night two. The wind was WNW and churning the channel mightily, but when we got within a mile of Albert, we could see that it was pretty flat. When we actually got in the anchorage, we found it serene. Not expecting any guests, we dropped a single hook about 150 yards from the peninsula and laid out 250 of rode and spent a very pleasant night.

We’ve been in the anchorage many times and never found it quite so flat. Chalk that up to the north in WNW wind. The more typical west wind will push you around quite a bit more.

Kelp abounds, though the crop is quite variable from year to year. We anchored clear of a large patch but woke up in the middle of a morass. Also, be aware of rocks near datum at the headland and on the western wall of the anchorage.

If the wind comes out of the east or if you have dry decks in the middle of the night and a southern chop, bail out. This is no place to be in a Santa Ana. The last time we were in there, we turned into our bunks with a forecast of light and variable westerly winds. The Bosun and I were up before dawn to check the anchor and found that the decks were dry. We checked weather radio and the forecast was the same. Nevertheless, we were nervous and planned to get out of the anchorage at first light. We barely made it out as the wind went from calm to 10 knots out of the east before we started heaving in the bow anchor. By the time we were ready to retrieve the stern anchor, the wind was gusting above 15. We were prepared to tie a buoy on the stern rode and jettison it for later retrieval but were able (barely) to get it aboard just as the wind topped 20. The problem here is that an east wind is directly on the beam, pushing your boat directly into the rocks. With only 75 ft. of clearance you find yourself in extremis in fairly light wind.

We did make it out safely, putting out a shortened main and headsail as the wind rapidly increased to 30. The forecast: still light and variable from the west.

Apparently that was true everywhere but our little patch of the Santa Cruz shoreline.

If you intend to go ashore, you’ll need a landing permit from the Nature Conservancy.

If you have new or amplifying information concerning this anchorage or the surrounding area, please e-mail Capt. Dan.

BTW –
This place is officially known as Albert Anchorage on the NOAA chart, however, most folks refer to it as Albert’s. Wikipedia recounts late 20th century history.