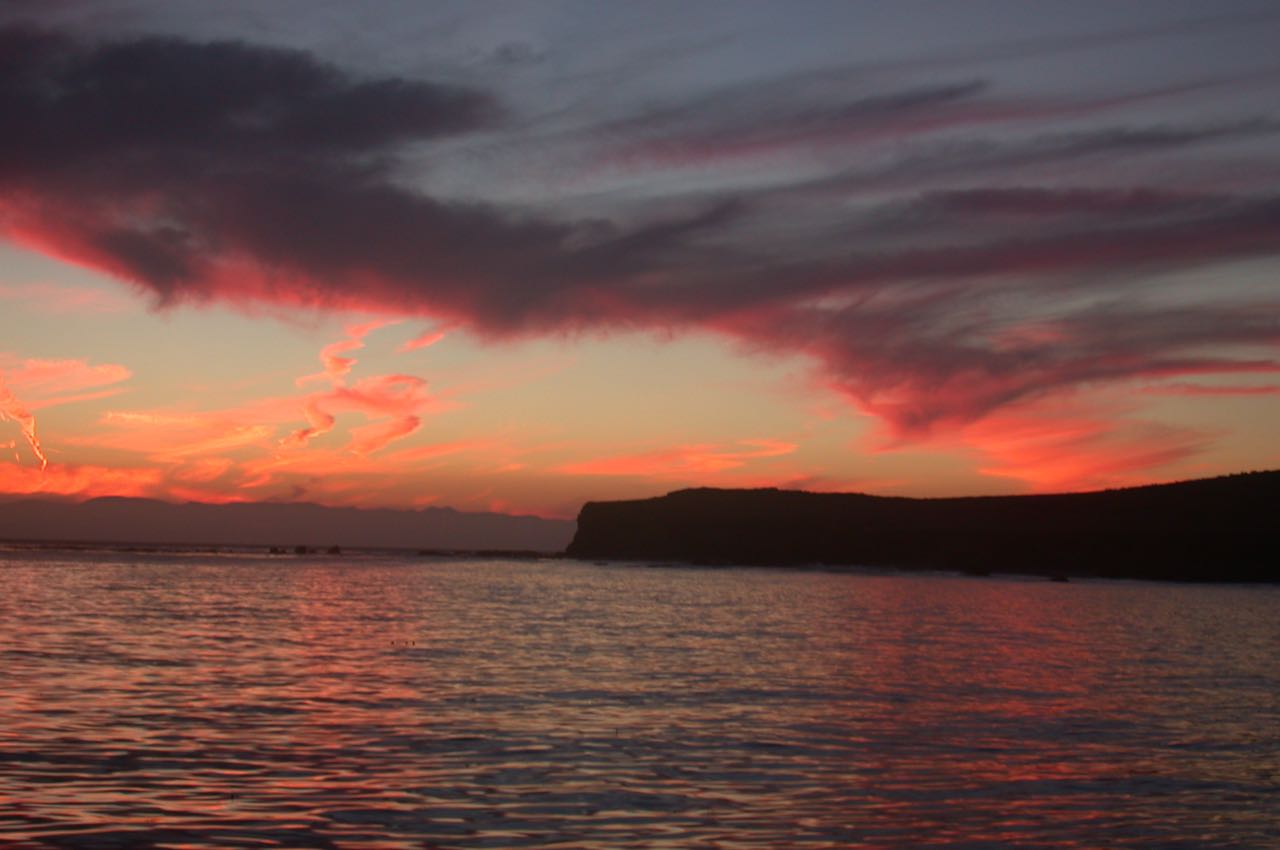 Morse Point is probably the best single-hook anchorage on the south shore of Santa Cruz. And it is the very best anchorage of all the Channel Islands to witness sunset, especially in fall and winter.

I’ve been in there – and by there – more than a dozen times and have always been the only boat. Perhaps I should have kept this the  “best kept secret of Santa Cruz.”

I guess it’s little-used as it is more than a leisurely one-day sail from local harbors.

When we first anchored – about two hours before sunset – it was blowing like hell. As you can see, things settled down quite nicely as the sky darkened.

Cruising the coast from the NW, skirt the reef, which lies in a SE line and extends roughly a half mile from the point. Once past the reef, shape a course toward Johnson Valley, the low area between Sierra Blanca, the tallest mountain in the vicinity, and Morse Point. Anchor well off the beach in 25 feet. Bottom is sand. We cruised in to 20 but found ourselves uncomfortably close to the surf line and backed out a bit.

Approaching from the SE, stay to seaward of Gull Island, then shape a course to the northwest (left) of Sierra Blanca. There are kelp beds on both sides of the reef and between Gull Island and the shore. All have been insignificant since 2009, but all are regenerating now, in 2021.

In 2014 the Gull Island light was decommissioned.

Most of the reef is visible at low tide; however, we give it a wide berth on arrival and departure regardless of tide. There is plenty of room between the reef and Gull Island and, on departure particularly, we continue to drive east for a good while before turning south.

Aim for Gull Island until clear of the reef. If proceeding east, figure on going at least a half mile south to avoid the kelp, which is  starting to prosper near the island.

In October 2006, for reasons that are too complicated to mention, we decided on a night departure. That should have been very simple, but the Gull Island light was inoperative — and now it has been shutdown completely — and we were moonless at 0300.

We got some very realistic DR practice in zero light conditions and ran our usually casual crew more like the Nimitz Special Sea and Anchor Detail. We did have the radar and GPS/chart plotter, but used those only to backup our time-distance-heading work. Just for drill, you understand.

Heading ESE out of the anchorage, you’ll encounter Gull Island. Kelp frequently mounds up between the island and Santa Cruz and seems to be increasing.

If you intend to go ashore, you’ll need a landing permit  from the Nature Conservancy. The link in the grid takes you to their online payment system.

If you have new or amplifying information concerning this anchorage or the surrounding area, please contact Capt. Dan. His e-mail link is at top left.